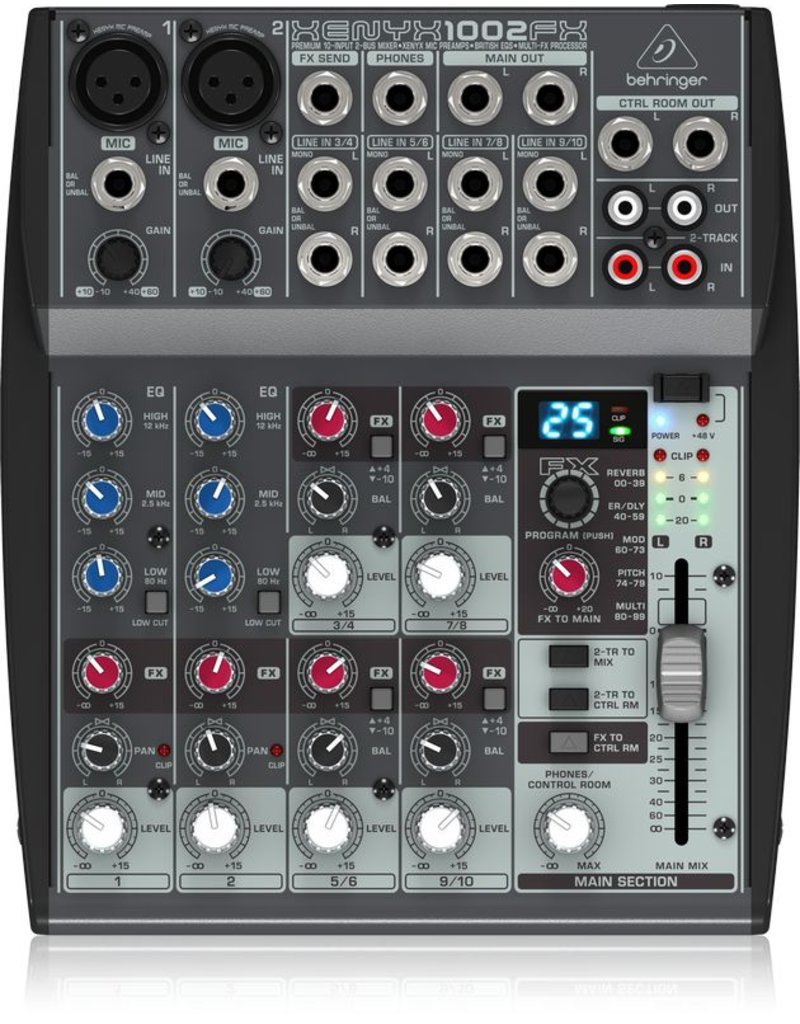 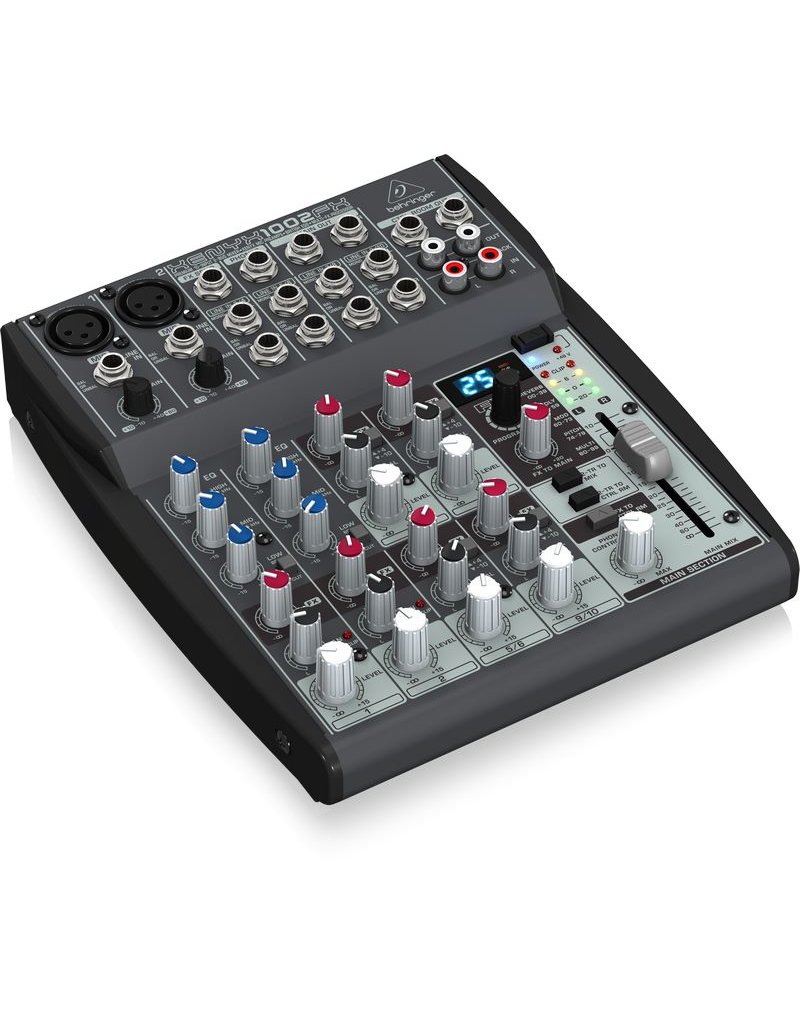 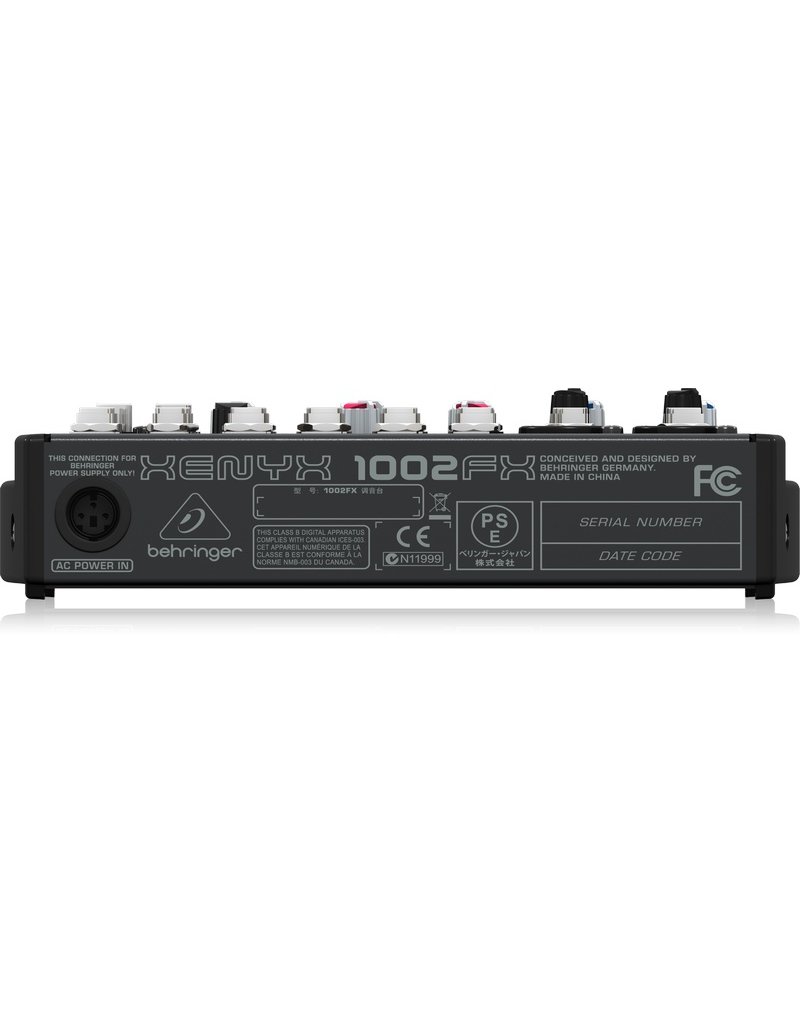 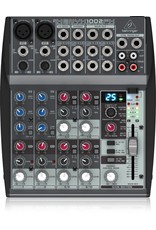 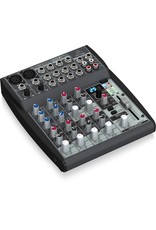 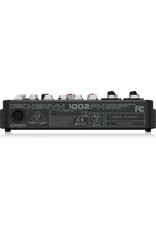 The compact XENYX 1002FX mixer allows you to effortlessly achieve premium-quality sound, thanks to its 2 onboard studio-grade XENYX Mic Preamps and ultra-musical “British” channel EQs. This handy little mixer provides a total of 10 Inputs (2 mic, 4 stereo) to handle a variety of input sources. Add to this our 24-Bit Multi-FX processor with 100 awesome presets including reverb, chorus, flanger, delay, pitch shifter and various multi-effects – and the 1002FX becomes an incredibly versatile mixer for your live performances.

The XENYX 1002FX gets its name from our legendary, high headroom XENYX mic preamps, which have been praised by audio engineers all over the world. These state-ofthe- art mic pres represent a major step in the evolution of audio technology – and they can easily hold their own, even when compared to the most expensive stand-alone mic preamps. XENYX preamps offer a staggering 130 dB of dynamic range, with a bandwidth that extends from below 10 Hz to well above 200 kHz. Armed with these outstanding mic preamps, the XENYX 1002FX provides such transparent, crystal-clear performance you just might think someone upgraded your mics while you weren’t looking.

The British consoles of the 1960s and ‘70s changed the sound of rock and roll – without them the British Invasion might not have happened. Those legendary mixing desks soon became the envy of engineers and producers all over the world. The channel EQ on our XENYX mixers is based on that very same circuitry, allowing you to imbue signals with incredible warmth and detailed musical character. Even when applied generously, these equalizers exhibit sweet forgiveness and superb audio quality.

The 10-input, 2-bus XENYX 1002FX has 2 XENYX mic preamps with +48 V phantom power, making it possible to use 2 dynamic or condenser microphones. The 3-band British EQ ensures warm, musical sound every time. Simple, high-quality controls make it possible to create beautiful mixes with minimal technical expertise. Play music between sets via the RCA CD/Tape Inputs (main mix or control room/phones assignable), and record your performance to outboard recording gear via the RCA Outputs. Add some outboard digital magic to your sound using the FX Send; simply connect an outboard device to apply effects such, as reverb or delay.

Equipped with our studio-grade 24-bit Multi-FX processor, the 1002FX gives you 100 mind-blowing digital effect presets such as delay, chorus and reverb. Apply them to any channel, as well as to the monitors and main output. Of course, if you have treasured outboard gear you’ve grown attached to, the 1002FX lets you integrate them into the mix – bypassing the built-in FX processor.