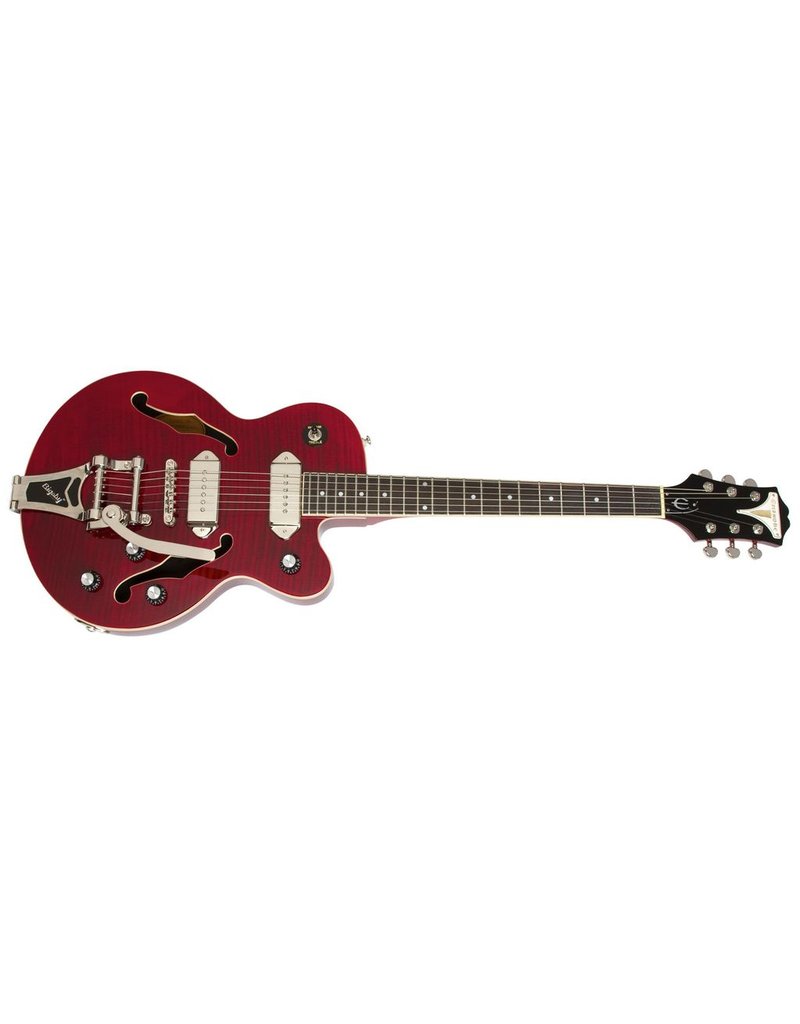 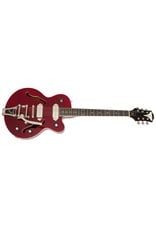 The Epiphone Wildkat is a true original, the first new archtop design of the modern era and a certified classic. Now for a limited time go Wild again with the Epiphone Ltd. Ed. 2014 Wildkat in Wine Red.

Epiphone has been a leader in archtop design since the 1930s and was one the first guitar manufactures to recognize that archtop fans needed pickups in their guitars to be heard on bigger stages and in raucous honky tonks. Throughout the 50s and 60s, Epiphone refined the archtop further with classics like the Riviera, the Sheraton, and the Casino.

The Ltd. Ed. 2014 Wildkat’s innovative design has the same classic profile of those vintage Epiphone archtops but made smaller for easier travel. The Wildkat features a solid Mahogany body that is computer-routed to create a perfectly tuned acoustic guitar-like body but with a “center block” just like Sheraton II or ES-335. The combination gives the Wildkat that round “archtop” tone with the incredible sustain of a solid body guitar. The Wildkat’s top is made from laminated Flame Maple with a stunning Wine Red finish for a semi-hollow body masterpiece you can only get from Epiphone.

First introduced in the early 1950s, Gibson's legendary P90 single coil pickup produced a raw powerful tone that helped define the blues and rock and roll in their formative years. Today, the P90's traditional combination of high output and brilliant tone is still considered a favorite among many top musicians. Known by such familiar nicknames as the "Soapbar" and the "Cobalt," the P90 still cuts through any type of music, all while displaying amazing tonal sensitivity for everything from blues and rock to mellow jazz riffs. It's perfect as a vintage replacement, and features vintage, braided two-conductor wiring. It's also fully wax potted to eliminate any chance of unwanted microphonic feedback.